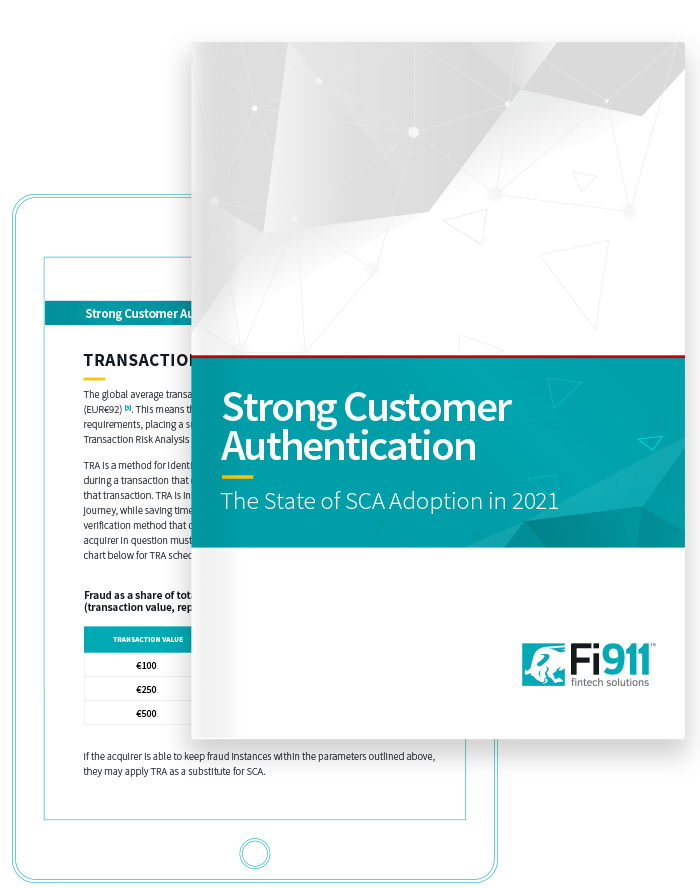 Strong Customer Authentication (SCA) standards may be the most consequential change impacting the payments space in 2021. This new guide will help you:

Security and authentication are top priorities for cardholders, merchants, and financial institutions alike. However, each of these players approach the subject from different angles and with different understandings. Strong Customer Authentication presents an international opportunity to standardize processes and expectations.

This informative new guide from Fi911® will clarify SCA requirements, outline threats that persist even after SCA adoption, and offer actionable advice to make SCA an asset—rather than a liability.

Security remains a top concern among consumers. This is especially true in regards toing remote channels like eCommerce; One study commissioned by the European Commission in 2018 found that only 69% of consumers were willing to purchase goods and services online. Among those who avoided eCommerce, 77% (or 24% of total respondents) said that payment security and privacy motivated their decision [1].

This is not an irrational concern. B; businesses operating in the ecommerceeCommerce, airline ticketing, money transfer, and banking services vertical will lose a projected USD$ 48 billion (EUR€39.4 billion) every year by 2023 due to evolving threats and fraudster behaviors. This is a 118% increase over projected losses in 2018 [2].

Governments around the world have taken action in response to these outstanding liabilities. One of the most noteworthy actions taken in the last decade was the imposition introduction of Strong Customer Authentication (SCA) standards as part of the revised Payment Service Directive (PSD2) in the European Union.

SCA is mainly a concern for merchants and financial institutions operating in the EU. However, those involved in finance outside the continent should stay up-to-date on new developments regarding SCA regulations and other developments as well. Europe is a key market and, although one may presently be able to do business in Europe without complying with SCA standards, that state of affairs may change. Plus, similar regulations could come to other markets.

Our research identified SCA as one of the key factors that will determine the impact of chargeback issuances through 2023 (alongside mobile banking, Visa Claims Resolution, and Mastercard Dispute Resolution).